The Economy and Me 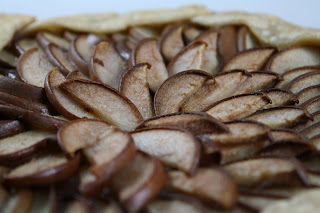 So the economy sucks right now. And I am trying to be better about what I buy and if I really need something before I buy it. I'm not going to lie I do have impulse buys. I am trying to be more diligent about using all of my ingredients before they go bad. So I had 2lbs of Seckel pears left over from my pear tarts so I had to figure out something to do with them. And I also had quite a bit of almond filling left over. So I figured I liked the flavor combo before why not change it up a little with a different crust and double the almond filling because well I could eat it out of the can! So I had a pie crust thawing as I was testing a recipe for a contest. And figured I could use the other one up with these pears.
So I tried my hand at making it look pretty. Do you ever try to do that? You see something some where that looks amazing and try it at home only to find it either ridiculously easy and it makes you wonder why you thought it was so cool. Or really hard and a Big pain in the ass and you never want to do it again and will now just purchase said item from now on. Well this was the first option, I always see tarts in these nice concentric circles but think man that is has got to be a pain, and it did take like 5 minutes to arrange them but I felt pretty good about my self after that. Maybe I could work in a Bakery, but those early hours would be a killer, I like my sleep people a lot. 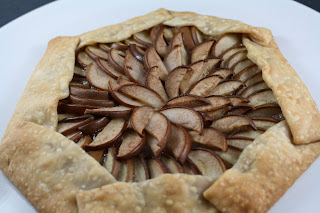 Preheat oven to 350. Unroll your pie crust onto a parchment lined baking sheet. Leaving a border of about 1 inch around spread the almond filling around in an even layer. Layer on the pears in a decorative pattern. Bake for 20 -25 minutes or until the pie crust starts to brown. Melt the apricot jelly and brush it on the pears to give them some sheen.
Email Post
Labels: Crostada Fruit Tart