I love cinnamon, the warmth and flavor it gives food I can't get enough of it. This has been a life long love affair, cinnamon toast, cinnamon toast cereal from my youth were my favorite breakfasts. I think I drove my mother crazy with the amount of cinnamon sugar I would go through making toast. I think I ate it almost every day so we went through alot. It was a staple by the toaster there was always a small bowl of it ready to use. This was before shakers were really prevalent, we did later get a shaker and it made it much easier to apply to the toast. Because of this I have a hard time understanding why people buy pre made cinnamon sugar mixes. This is just one of the many convenience items we have now in our society that I really don't understand. Back to the recipe, when ever I see a cinnamon recipe I always bookmark it to make because no matter what it is I know I will like it. So when I saw this recipe I knew I had to make it and wasted no time in making it. I have been craving sweets ever since I got back from vacation. Because everyone knows that diets go out the window on vacation so my definitely did go out the window. So this is my first post after vacation and it really hit the spot, the cinnamon filling mixture was fantastic. For being a quick bread it is a little more involved but it once it is done it looks more complicated than it really is.

Preheat oven to 350 degrees and spray a 9x5 inch loaf pan with non stick spray. Mix the flour, baking soda, baking powder, and salt together in a bowl and set aside. Mix the buttermilk and vanilla in a measuring cup and set aside. Mix the brown sugar and cinnamon together in a bowl and set aside. In a bowl cream the butter and white sugar together and then add in the eggs one at a time. Add 1/3 of the flour mixture and mix to combine, then add 1/2 of the buttermilk mixture. Repeat this and end with the flour. Pour 1/3 of the batter into the prepared pan and top with 1/3 of the cinnamon mixture, repeat so that the final layer of cinnamon mixture is the topping on the bread. Bake for 50-60 minutes or until a cake tester comes out clean. 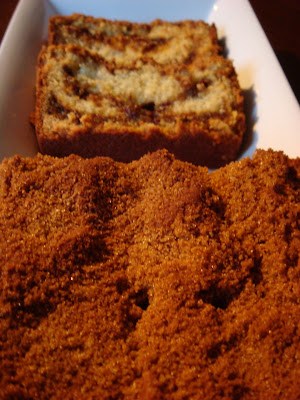