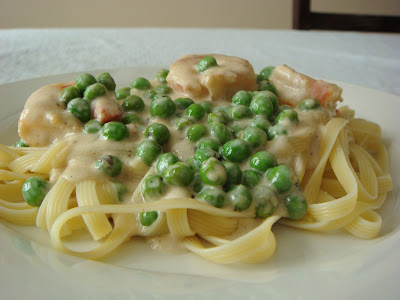 I love late spring. The produce starts to come in and is extremely fresh. It just tastes fantastic. But I haven’t had a change to go to the Farmer’s Market yet so while yearning for the fresh taste I decided to make this for dinner last night. It was really good, creamy and warm and the peas were fantastic. I love pasta, it’s pretty much my downfall. Well carbs in general are, if its carbohydrate loaded I’m all over it. So at least I got some vegetables and some protein in my stomach as well with this dish. I think this will be the start to a new era on my blog. I was just posting things that I would bake and would never post what I ate for real food. Then P said why don’t you post what you make for dinner as he is a big fan of most dinners at our house. So I figured what the hell I will. So I hope you enjoy the new “Real Food” that will be making some appearances on the blog now. Don’t worry it will still be primarily a baking blog. (Most days I’m too tired to even pick up a camera after cooking dinner) 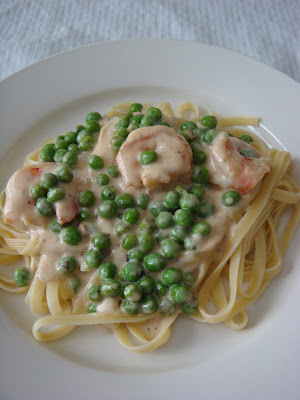 1 1lb of Pasta – Spaghetti, Fettuccine any long noodle you like
1 ¼ cups of heavy cream
1 cup of grated parmesan cheese
1 cup of frozen peas
12 – 15 medium shrimp – depends on how many people you are feeding I would do about 4 shrimp per person
2 tablespoons of olive oil
1 tablespoon of Trinidad seasoning (from Penzey’s)
Salt and Pepper to taste

In a plastic bag add in the shrimp, olive oil and Trinidad seasoning. Let sit for 5 minutes while you gather the rest of your ingredients.

Bring a large pot of water to a boil, salt the water and then add in your pasta and cook as directed on your pasta box. While the pasta is cooking, cook the shrimp a few at a time in a large skillet over medium heat and once they are nice and opaque move the cooked shrimp to a plate. Continue until all of the shrimp are cooked. Once the last shrimp has been removed add in the heavy cream and scrape up all of the bits off of the bottom of the pan. Let the cream come up to a simmer and then add in the parmesan cheese. Stir until the cheese has melted and let the whole mixture bubble away to thicken and reduce slightly. Once the sauce has thickened add in the peas and shrimp. For the shrimp it is up to you if you want to leave the tails on or not. I chose not to have the tails on. Once the peas and shrimp have warmed through taste the sauce and season to taste. Drain your pasta once it is done cooking and add it to the sauce and toss to combine or if you have picky eaters let them add the sauce on their own serving of pasta. Serve with extra parmesan cheese.