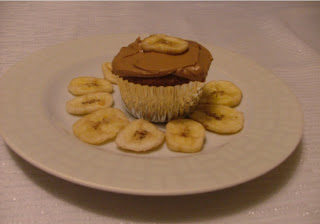 I love Bananas Foster so when I saw the cupcake challenge over at Cupcake Bakeshop and Vanilla Garlic for reinvention it just came to me. So here goes on my very first challenge. I will post all the recipes and then how to assemble.

Cream butter and sugar, add eggs and when they are incorporated add the sour cream.
Beat well, then add bananas, flour, baking soda and vanilla.
Bake in a 350 degree oven. Fill the cupcake liners 3/4 of the way. Use the foil cupcake liners so that it can hold the rum syrup.
Bake for 20-25 minutes until it is lightly golden brown. Cool in the muffin pan.
This will probably make 18 cupcakes. I only had time to make 12 so Im not sure exactly how many it will make.

Combine the sugar, water and butter in a sauce pan and let it start to bubble at the edges. Take it off the heat and add the rum. Put it back on the heat and let it come back up to a simmer.

Mix the sugar and half and half in a sauce pan and cook over low heat until it reaches the soft ball stage or 235 degrees on a candy thermometer. Remove from the heat stir in the butter and then let the syrup cool. Add in the vanilla and cinnamon and beat the frosting until it reaches a consistency you like. You may need to add more half and half.

Ok now that all of the recipe is out of the way time to assemble.

Take your almost cool muffin pan of cupcakes and put about 1 table spoon of rum syrup over each cupcake. Let it soak in for 15 -20 minutes or until the cupcakes are completely cool. Take a heaping amount of frosting and put it on top of the cupcake. Now if you are good at frosting go for it but I'm not, so what you see is what you get. Then top with a banana chip or if you are serving right away a slice of banana.

These went like hotcakes at P's office. So I think that means that they are good.