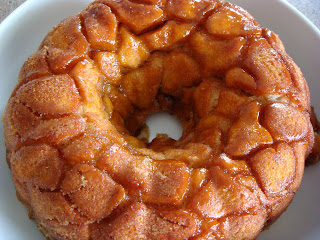 I had been thinking about making monkey bread for some time now as it reminds me of my childhood and first baking experiences. But just taking tubes of biscuits and dipping them in butter and cinnamon sugar would not do now. I wanted to step it up alittle but was racking my brain to figure out how. Icing? No to much would stay on top and the bottom layers would miss out. Better ingredients? No that ruins the whole idea of monkey bread, you really have to use the store bought dough. So I definitely had a seek and you shall find moment when I came across this recipe. But I had to make it how I remembered so it couldn't be mini monkey bread but the brown sugar and butter would add just enough of something extra.

Preheat your oven to 350. Spray a Bundt cake pan or Angel food cake pan with non-stick cooking spray. Place the sugar and cinnamon in a plastic bag and shake to combine. Cut your biscuits into 4 pieces each. Drop the biscuit pieces a few at a time into the bag and shake. I found that adding 10 or so pieces at once would cause the pieces to not be covered throughly in the sugar mixture. Place coated pieces in pan as evenly as possible. Melt the butter and brown sugar in a pan and boil for 1 minute. Pour that over the pieces of dough in the pan.
Bake for 30-40 minutes it really depends on how much you like your dough cooked.

I liked this recipe a lot it kinda stepped up the monkey bread I used to know and had great flavor. I think in a bigger pan like this though that you should do 2 layers of the brown sugar sauce as the bottom didn't have as much brown sugar as I would have liked. So next time I will be splitting the sauce between 2 layers of monkey bread. 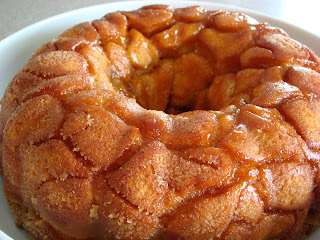 Once it has been taken apart. Perfectly sweet and crunchy on the outside and a light puffy dough on the inside. 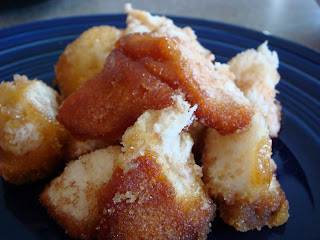