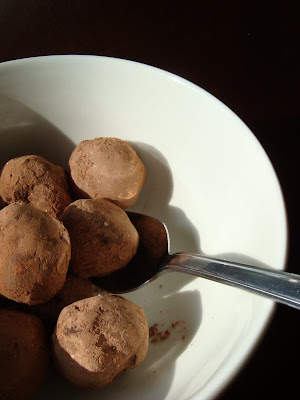 When ever I see a chocolate truffle finished simply in cocoa powder it reminds me of Cocoa Puffs. Now I know some people are gasping at the thought of this elegant and and decadent dessert being compared to a breakfast cereal. But to me they are very similar as they are both forbidden. I am a chocoholic there I said it. And Cocoa Puffs was one of the many cereals that I could not eat as a child as my mother did not consider it breakfast food, I mean for petes sake its made of chocolate. But I still lusted after it trying to sneak it in the cart as a child. Promising to only eat it on Sundays I tried everything just to get one box of Cocoa Puffs. I did not succeed, so later in life when I did taste Cocoa Puffs, I was disappointed with the lack of chocolate taste. I'm sure as a child it would have been plenty chocolaty but as my palette had changed by the time I had tasted the cereal it was not that deep chocolate flavor that I love. Which only truffles can supply but when I make truffles they need to leave the house immediately because I can polish off quite a few in a sitting. So what to do with left over heavy cream and not in the mood to bake. Make some truffles so that is what I did. 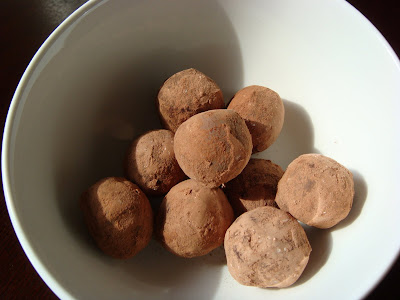 Heat cream and butter in a saucepan until it comes to a roiling boil. Remove the cream from the heat and pour over the chocolate in a bowl and allow the chocolate to melt until smooth. Add in the liqueur and spread mixture out on a parchment lined pan or in a bowl. Leave in a cool place uncovered for 24 hours in the fridge for up to an hour. To make the truffles, pull off a quarter size piece from the tray or bowl and roll into a bowl. Roll in your coating of choice which can be cocoa powder, chopped nuts or in tempered chocolate. 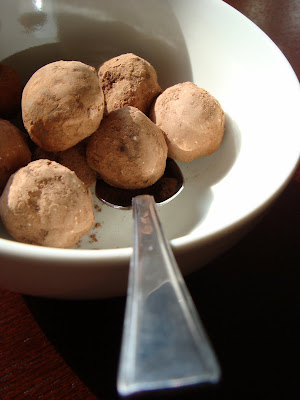