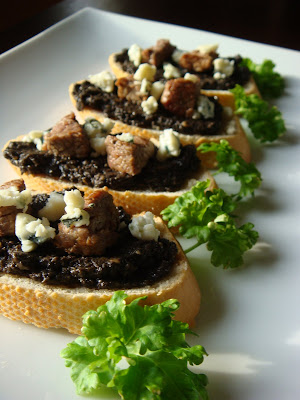 I have always wanted to throw a proper dinner party but it seems like an awful lot of work. So what about just an appetizer party. So I have been trying to think of new and interesting appetizers and this is one of the ones I came up with. Now you may notice that some of the pictures have sauce and some do not. If you really like blue cheese by all means do the sauce its fantastic but if you want to cool it with the cheese then just do the crumbles on top. But the base of the crostini is a mushroom spread that is basically my mushroom pasta sauce. This was a nice combination of flavors with the earthy mushrooms, buttery steak, and tangy cheese. P really enjoyed it after the addition of the blue cheese sauce. So you might be seeing more appetizers from me in the future or you might not. I haven't fully decided if I can pull of an appetizer party either. I know I have issues with commitment its a wonder I'm married. But this one I will be making again for sure. Don't be daunted by the long recipe its really easy just in a lot of components that make up the final product. 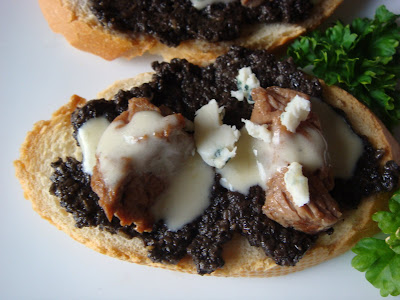 Mushroom Component -
In a medium skillet heat the 4 tablespoons of oil over medium heat until it has a ripple on the surface. Add in all of mushrooms and saute for 5-6 minute until they are a nice brown color. Add in the 1 teaspoon of salt and 1/2 teaspoon of pepper. Saute for another minute then transfer to a blender or food processor. Add in the wine and blend until it is a coarse looking spread. Add back into the pan and stir in the cheese. Set aside.
Crostini Component -
Take your cut baguette pieces and place them in a single layer on a baking sheet and bake at 350 degrees for 8-10 minutes until they are crisp but still soft in the center. Place on serving platter.
Steak Component -
In a bowl place the 2 tablespoons of oil,1/2 teaspoon of salt, and 1/4 teaspoon of pepper and the steak. Coat the steak in the oil and salt and pepper. In a large skillet over high heat cook the steak for 4-5 minutes, turning them so that all of the sides are browned and the center is about medium. Once cooked set on a plate to rest for a few minutes.
Blue Cheese Sauce Component -
In that same large skillet melt the butter over medium heat. Once melted add in the heavy cream and 1/2 cup of blue cheese. Cook until the cheese has melted and the sauce and thickened slightly.

Assembly -
Take a crostini and spread a tablespoon of mushroom spread on it then top with a few pieces of steak and drizzle with the blue cheese sauce and garnish with some blue cheese crumbles. 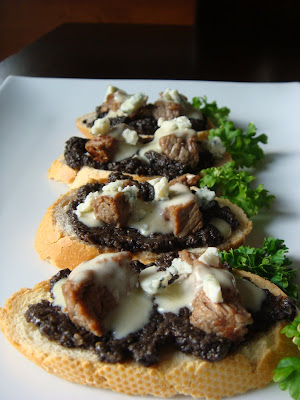