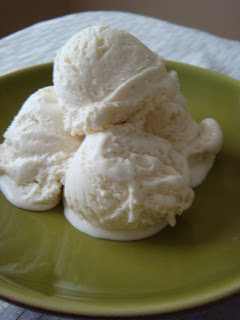 This post is all about cravings. As it encompasses two of my favorite desserts, cheesecake and ice cream. It was way too hot to turn on the oven today but none the less I was craving cheesecake. So I decided that I should probably go through my cookbooks and see what I could make. I have owned Perfect Scoop for probably a year now and haven't made a damn thing out of it. So it was about time. So when I saw Cheesecake Ice Cream I knew I had hit the jackpot. There were multiple pluses to this recipe, you did not have to cook the base, and it was all made in the blender so basically no work for me. The base tastes as good as the ice cream, so don't eat too much of it otherwise there won't be much ice cream. Both P and I loved this ice cream, it really does taste like cheesecake. 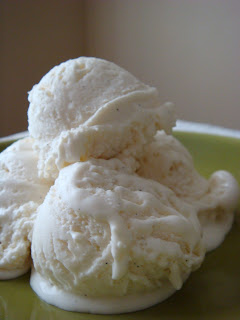 8 oz of cream cheese, cut into small pieces
1 cup of sour cream
1/2 cup of half and half
2/3 cup of sugar
1 tablespoon of vanilla bean paste
Pinch of salt

In a blender or food processor add the sour cream, cream cheese, half and half, sugar, vanilla bean paste and salt. Blend until smooth and then chill in the refrigerator. Then freeze it your ice cream maker according to manufacturer's instructions.