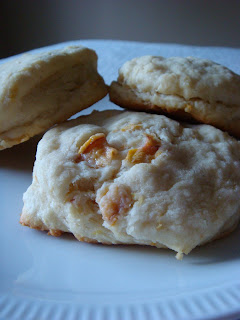 Once again I over bought on peaches this time they were Southern peaches from South Carolina. And I had to figure out something to do with them. So as they were Southern peaches and both peaches and biscuits scream the South to me. I had an idea to marry the two together. And freeze the rest of the peaches for a later application, Bellini's anyone? So after what felt like hours of peeling and slicing peaches (seriously I hate peeling peaches), I was able to start on my biscuits. This is my go to biscuit recipe and I think next time I could use a little brown sugar to sweeten the biscuits up. But overall these were good not really peachy but good. It was that horrible fine line of if I put more peaches it won't hold together. Maybe some peach puree next time. Yum! In any event a few seconds in the microwave and some butter and honey and you have yourself a damn good snack. I hope P's office likes them, as they are my new guinea pigs for baking. Don't you wish you worked there! 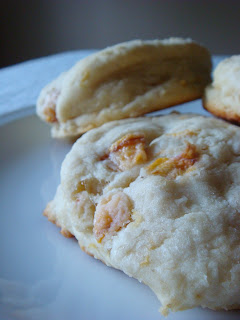 Preheat oven to 400 degrees. In a mixing bowl combine flour, baking powder and salt. Add in the desired optional ingredients. Cut butter into the mixture until the mixture resembles coarse crumbs. Add cream until just combined. Add in the chopped peach pieces. Dough can be dropped on to a parchment lined baking sheet or patted out and cut into biscuits. Bake 12-15 minutes or until golden brown.