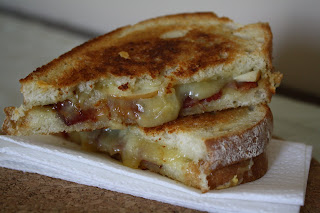 Grilled Cheese was one my favorite things to eat growing up. It was made with Kraft singles and always served with Tomato soup, but now that my tastes have changed I still like grilled cheese just in a more grown up way. So when Kathy from Panini Happy said she was going to have a Grilled Cheese Pageant I knew I had to enter. I love this combination of Smoky bacon, sweet and tart apples and sharp cheddar. And I wouldn't waste anything as good as the rendered fat off of the bacon so that was what I used to coat the bread to grill up nice and brown. But that was just in the essence of not wanting to waste anything it had nothing to do with taste at all. :) 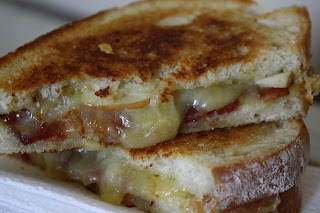 Line up 4 slices of bread and top with some cheese, then layer apple slices, then more cheese then bacon and top with the remaining cheese. Brush both sides with bacon grease and grill either in a skillet or on a panini press until the bread is a nice golden brown and the cheese is melted.
Email Post