Who wouldn't want some Cheesecake 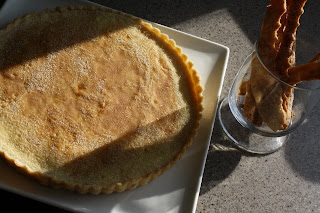 So ever since I made that Bananas Foster Cheesecake Tart I have been on a mission to get my cheesecake fix in a short amount of time. Because who doesn't like a good cheesecake and who wants to wait for cheesecake to cool. So this is my happy medium. It is more cheesecake like than the Bananas Foster one but doesn't take as long to bake or cool. So it works for me. Back to what I said before who doesn't like a good cheesecake, I am always shocked to hear when people don't like cheesecake, because I think it is one of those perfect desserts. I mean what is there not to like, it comes in a million flavors thanks to its versatility and its creamy, dense, rich, I could go on forever because I like it so much. And I'll let you in on a little secret, I used pie dough for a reason. A few weeks back my mom brought over a picture of me when I was little standing on a chair helping make pie or to be more exact helping make the pie crust scraps into our treat we got when ever my mom made pie. She would take all the strips and dust them with cinnamon sugar and bake them in the oven. I loved helping with that because I felt like I was really cooking even though I probably wasn't allowed near the pie before baking. And I have been craving them ever since. But I needed a reason to have pie scraps I wasn't just going to cut up some pie dough, so this tart gave me the perfect opportunity to make these. 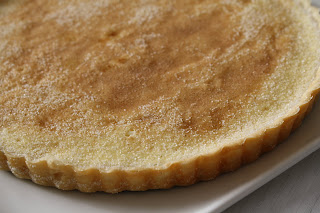 Preheat oven to 350 degrees. Unroll pie crust into a 9 in fluted tart pan with a removable bottom. Press it into the edges and trim off the excess. Prick with a fork all over and place on a baking sheet. Bake for 10 minutes, then remove to let it cool slightly. In a bowl mix the cream cheese and sugar until smooth. Add in the eggs, salt and vanilla bean paste and mix until combined. Pour into the par baked shell and sprinkle with the cinnamon sugar. Bake for another 15 to 20 minutes or until the center no longer jiggles. Let cool completely and refrigerate for at least 1 hours. Or just eat it right away like me because I don’t have self control!

I would top this with fresh berries if they were in season and it would be fantastic but since they aren't cinnamon sugar works just fine for me!
Email Post
Labels: Cheesecake Tart