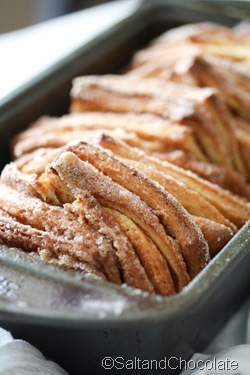 Everyone has them, things that you don’t want people to know.

1. I have a love of bad reality TV, if most people would gag at the sight of the show you can bet I’m engrossed in it.

2. Cream Cheese frosting, I could eat a whole batch no problem in way too short of a time frame.

3. Dishes, Platters, Glasses, put me in a Home store and I’ll gravitate right to them. I do have someone to blame for this one. Thanks Mom!

4. The Color Purple, If its purple I have to have it, doesn’t matter if I already have 4 purple T shirts that are exactly the same I need another because its some how different.
And Last but not least

5. Cinnamon, its it in something on something doesn’t matter I’m want it.  I used to swap out the vanilla ice cream on apple pie a la mode for cinnamon ice cream all the time in middle and high school after school events. I just LOVE the stuff.

So when I saw this recipe on Joy the Baker’s site I thought. I must eat you immediately. 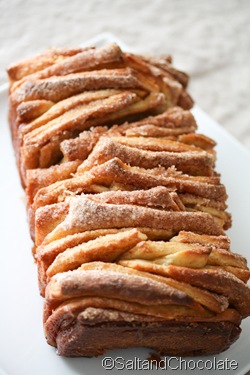 I didn’t change a thing from her recipe and she has great pictures and tutorial on how to stack it all together.
Get the Recipe Here.

And if you haven’t listened to her Pod Casts yet I would strongly suggest that you do. They are hilarious!