Cheese and Cake who doesn't love that 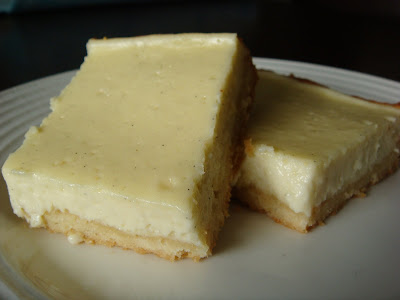 I love cheesecake of any kind. As a kid, if we had cheesecake, I would always talk my mom into giving me some as a treat for breakfast. It had to be on the grounds that it had eggs, milk, cream cheese and a crust = bread, so it was like a complete meal in one slice. And if it had fruit on it, then that was the final argument for my case. I normally got my way, but the piece was always smaller than the night before. In any event, I love cheesecake. The creamy texture that almost melts in your mouth, it's glorious. I would say my favorite is plain with a sour cream
topping. But honestly, if its cheesecake, Ill eat it. When I saw these cheesecake bars, I knew I had to make them, as they were easier to transport, and could serve as party food. I think if I were to do them for a party, I would probably cut out rounds with a cookie cutter so it
would be more of a bite size desert. I liked that they were 'cheesecakey', but not like a huge piece of cheesecake, so you could probably eat a few. Who cares about moderation? They were very good, but needed a little more vanilla flavor for my taste.
Vanilla Bean Cheesecake Bars
Crust
1/3 cup white sugar
1 teaspoon of Vanilla Bean Paste
½ cup butter, softened
1 ½ cups of AP Flour
¼ teaspoon of salt
Filling
½ cup white sugar
½ cup heavy cream
2 (8 oz.) packages plain cream cheese, room temperature
3 large eggs, room temperature
2 teaspoons of vanilla bean paste
1 tablespoon of AP Flour
Preheat oven to 350 degrees. Spray a 9x13 baking pan with non stick spray. In a large bowl cream together the butter and sugar until smooth and fluffy. Add in your vanilla bean paste and stir to combine. Gradually beat in flour and salt until mixture is crumbly. Press evenly into pan and bake for 15-17 minutes.
While that is baking, combine sugar, heavy cream, and cream cheese in the bowl of a food processor and process until smooth. Add in the eggs one at a time and wait until the last egg is fully incorporated before adding the next. Add in the Vanilla bean paste and flour and process
until smooth. Pour the filling over the hot crust and return to the over for another 13 - 15 minutes or until the filling is set and doesn't jiggle in the center.
Cool completely before slicing or refrigerate before serving. 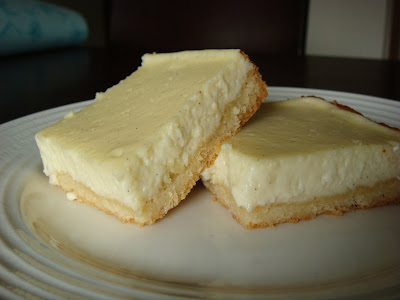