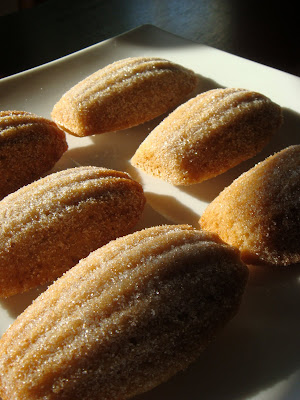 I shop at a lot of grocery stores weekly. Some people might even think too many. I shop at 4-5 stores and the occasional 6th. It might seem like a lot but I am kind of a picky eater, and very specific about my food. Not that I won’t try something, I just like what I like and if I have to drive around so be it. So while shopping a few weekends ago at one of my stores, I came across a jar of Pear Sauce. Needless to say, I was intrigued by this, and had to purchase it. So when I got it home, I took it out and just set it on the counter for a few days, trying to figure out what to use it for. I knew I wanted to use it to bake something, but what? So while thumbing through my large binder of recipes, I came across this one. I knew immediately that it would satisfy two needs. One, I could use my pear sauce to replace the pureed apples. Two, I could make madeleines for the first time. I bought a madeleine pan probably 6 – 8 months ago but have never used it. I tend to do that with baking equipment. I will have this need for something, then it gets stored away for a good few months until I finally use it. But Madeleines would be made and Pear sauce would be used.

Preheat oven to 350 degrees. Spray madeleine molds with non stick spray. In a bowl combine flour, baking powder, and cinnamon, set aside. In a mixer cream together butter and sugars until light and fluffy. Add in eggs and pear sauce and beat until combined. Stir in the flour mixture and fold until the flour has been incorporated in to the wet mixture. Place a heaping teaspoon of the mixture in each mold and bake for 12-14 minutes or until the tops are golden. Remove from the oven and cool for 5 minutes in the tray and then coat lightly with sugar. This makes 24 so
I had to cook mine in 2 batches.

These were wonderfully light and moist, and I am already thinking of other ways to create a new version. 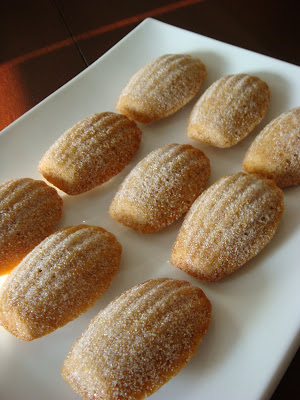