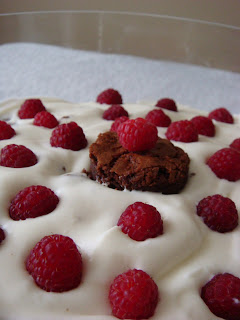 I had a Bachelorette party to go to on Saturday for my good friend Jodie. So I decided since I was going to ride the train downtown that I would need something very portable and that could sit without refrigeration for a while. So brownies it is and bite size is always better. So that meant I had left over brownie pieces and I wasn’t going to throw those away. So another trifle was in the works and good thing my family was coming over so that other people would eat it and I wouldn’t eat it all! So this is another Faux Mousse Trifle. The Cheesecake flavor was very light and the brownies gave great texture and contrast. My raspberries were probably the last of the season from a little farm stand by my work. Sad but true, so they were a nice burst of perfect raspberry flavor in your mouth. Everyone liked the trifle of course P did the trifle lover that he is.

To Assemble
In the bottom of your dish cover the bottom with the brownie pieces, then layer on the faux mousse. Repeat a few more times and top with the raspberries.
Email Post
Labels: Chocolate Fruit