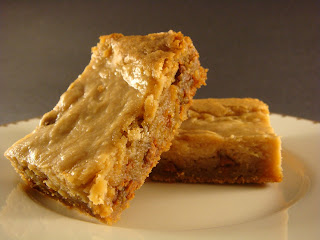 Do you ever have those days or in this case weeks where you feel like time is just disappearing. That is where I am at right now. My work did lay offs and that means the people left have to pick up the slack and now that the holidays are over its starting to get busy again. So I don't have any energy or time to do anything after work. That means no baking or anything that brings joy to my life. Between work, my holiday baking and my very first dinner party, I am wiped out this month. So that means no Daring Bakers challenge, which I feel awful about because I think that is my 3rd time missing but I just couldn't muster the strength. I made these Cheesecake Blondies with the equally hard to find Cinnamon Chips in November. If you can find the chips I would suggest buying more than one bag because it took me a few months to find them. So enjoy this great recipe and I'll talk to you all in 2009! 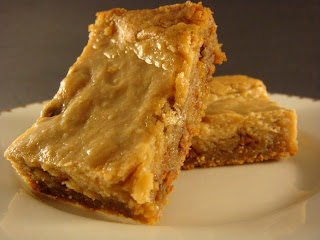 Preheat oven to 350 and line an 8x8 inch pan with foil and spray with non stick spray. In a bowl combine the cream cheese, sugar, cinnamon, flour and vanilla until smooth, then add in the egg yolk and beat until combined. In another bowl combine the melted butter and brown sugar and beat until smooth. Add in the egg and vanilla mix to combine. Add in the salt, flour, baking powder and cinnamon and mix to combine. Mix in the Cinnamon chips and spread into the prepared pan. Place small amounts of cream cheese over the blondie layer and run a knife through them to create swirls. Bake for 25-30 minutes or until the middle is set. Cool completely before cutting.
Email Post
Labels: Blondies Cheesecake