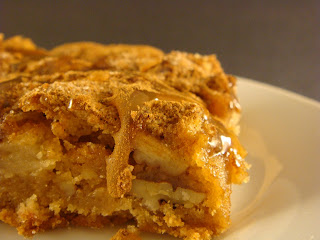 My husband has class on Tuesday’s and I have decided to subject them to my baked goods as I don’t need to be eating as much as I am. So this was the first thing I sent with him and boy were they good. I was wishing that I wasn’t planning on sending them because I think I could polish off the whole 9x13 pan by myself. So they had to leave the house as soon as possible. His class really liked them so after a week off I am going to be making something again tonight for them. I don’t know about you but I have to send almost everything I make out of the house immediately otherwise I think I would weigh a million pounds. I already need to hit the treadmill more than I do, Leslie’s self imposed hiatus is sounding really tempting right now but with the holiday’s around the corner I don’t think I will be able to avoid any desserts! 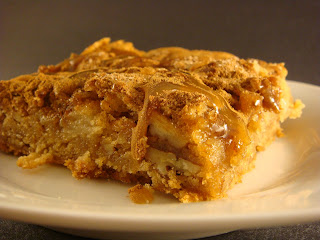 Preheat oven to 350 degrees, spray a 9x13 inch pan with non stick spray. Mix together flour, baking powder, salt, and 1 teaspoon of cinnamon; set aside.
In a large bowl, mix together melted butter, brown sugar, and 1 cup of white sugar with a wooden spoon until smooth. Stir in the eggs and vanilla. Blend in the flour mixture until just combined, then stir in the apples. Spread the mixture evenly into the prepared pan. In a cup or small bowl, stir together the remaining cinnamon and sugar; sprinkle over the top of the bars.
Bake for 30-35 minutes in preheated oven; finished bars should spring back when lightly touched. Cool in the pan, and cut into squares.
After these cooled I drizzled them with caramel sundae sauce.