Long Shot has become a word that is quite prevalent in my recent vocabulary. So this post is no exception. I entered a proposal to host a party for the Smirnoff Summer Entertaining Extravaganza that was partnered with Food Buzz on a Long Shot and low and behold they liked my idea and I was chosen to take that proposal and turn it into the BBQ of my Dreams.

So on to the Good Part, the food. The Menu is Spicy Pork Tacos with Guacamole, Sour Cream and Cotija Cheese, BBQ Pulled Pork, Vanilla Cornbread, two types of Mac and Cheese and a Skillet Cookie with Ice cream. Once I got the menu settled I was all set and the BBQ was a hit, everyone loved the food and I think some items will be repeated for sure. The Spicy Pork and the Quattro Formaggi Mac and Cheese just to name a few. 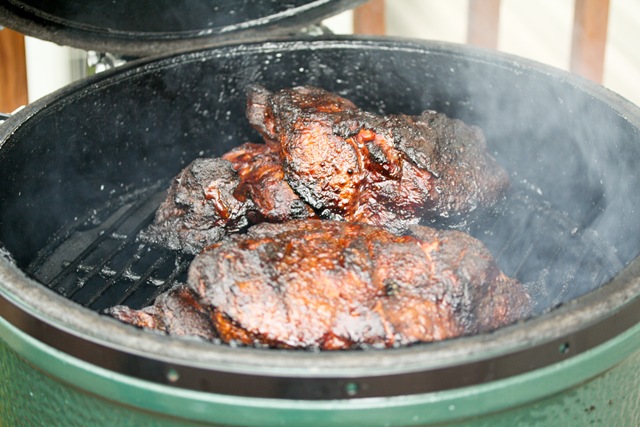 Look at the Pork in all its Glory. Man I love our Green Egg! 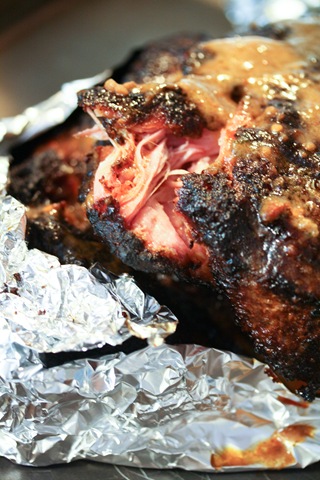 Spicy Pork with Lime Chipotle Sauce, Surprising how with just a change of the rub and sauce the Pork shoulders can taste so different. 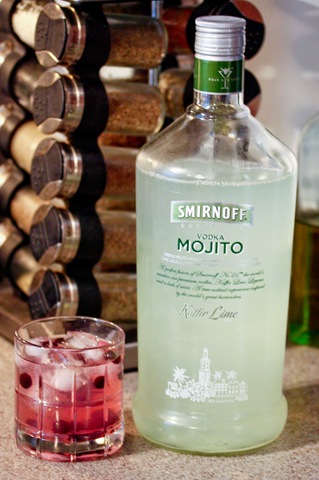 And What is a Party with out drinks, I kept it easy for me and went out and bought pre made Mojitos. Just add your own fruit and a squeeze of lime! 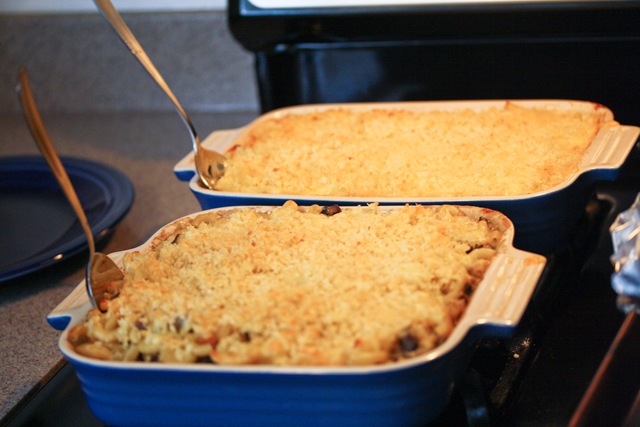 That is right not one but two different types of Mac and Cheese both gourmet in flavor. Quattro Formaggi (Four Cheese) and Portobello and Bacon with Truffle Oil. 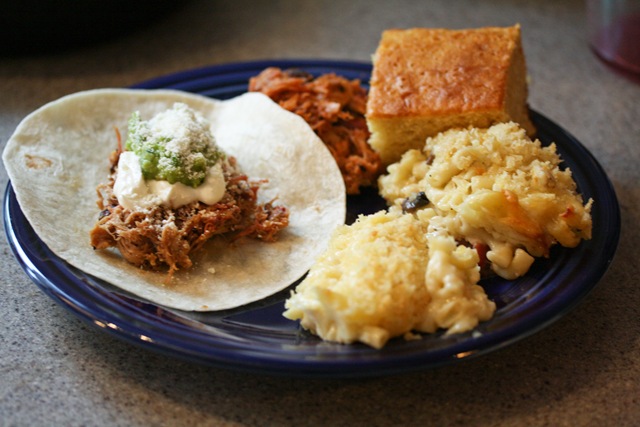 This was the official tasting plate, not to shabby! You have BBQ Pork, Corn Bread, Portobello and Bacon Mac and Cheese, Quattro Formaggi Mac and Cheese and then a Spicy Pork taco. 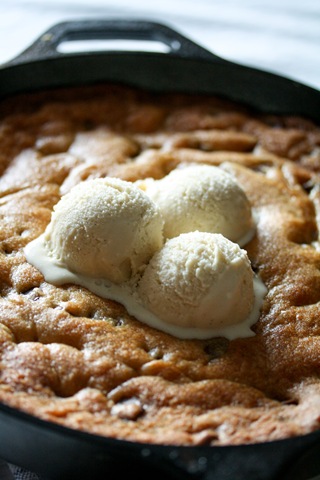 And what would a party be with out dessert so a Skillet Chocolate Chip Cookie with Vanilla Bourbon Ice Cream.

So I guess you would like the recipes for some of these.

Mac and Cheese – Base Recipe

For the Quattro Formaggi – Stir in 8 oz of goat cheese broken in to pieces, and 10 –12 oz of Roquefort Cheese depending on how much blue cheese you like. Make sure not to add these to the sauce but after the sauce and noodles have been mixed together.

For the Portobello and Bacon – Stir in 1 1/2 cups of sautéed portobello mushrooms and 1/3 lb of cooked bacon cut up or crumbled into pieces. Add 2 tablespoons of truffle oil to the breadcrumb mixture.

Pour into the baking dish and let sit at room temperature for 10 –15 minutes or it can be made up to this point and put in the fridge for the next day.

Preheat oven to 375. Melt 1/4 cup of butter and mix in the bread crumbs to this mixture. Sprinkle the bread crumbs evenly over the top and bake for 30 –40 minutes until the breadcrumbs are golden and the cheese is bubbling.

1 batch of your favorite chocolate chip cookie recipe, I know everyone has a favorite.

Preheat oven to 350, spray a 12 inch cast iron skillet liberally with non stick spray. Press your cookie dough into the skillet in a even layer that should fill the skillet up about 1/2 way. Bake for 25-30 minutes until just the center jiggles when shaken. Let it set up for 10 minutes and serve with Vanilla Bourbon Ice Cream. The cookie will be under cooked but that is on purpose. If you would like it to be completely cooked feel free to cook it longer.

Combine the cream, milk and vanilla bean paste in a sauce pan and bring it to just under a boil while over medium heat. Turn it off and let it cool slightly. In a bowl combine the egg yolks, sugar and salt, whisk until the mixture lightens in color. Add in some of the hot cream mixture into the egg mixture to temper it and then pour into the cream mixture and whisk to combine and cook over medium heat until the mixture thickens and coats the back of a spoon. Remove from the heat and strain through a mesh sieve. Add in the vanilla extract and bourbon. Let the mixture chill completely in the fridge (at least 4 hours) and then freeze according to your ice cream makers instructions.

Vanilla Cornbread can be found HERE

And last but not least the Pork and this one I’m sorry but its all P and he isn't sharing. He has a secret rub for his BBQ and even I don’t get to know it. If I did know it would totally be sharing it so that is probably why I don’t know it!