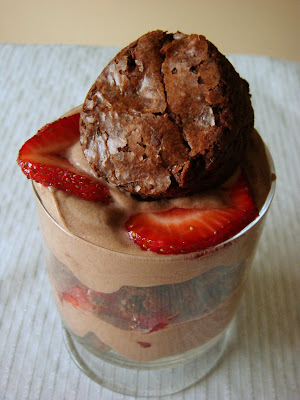 I said I would use up the rest of the brownie pieces in something and here it is. P loves trifles, I mean LOVES them. Now he didn't even know what a trifle was until he met me but now that he does he can't get enough. So these are Fake out trifles because I use a fake out mousse. This can dessert can be thrown together in minutes and stored in the fridge for a few days. This is my go to dessert in the summer because its easy and looks beautiful with minimal effort. Follow any one of the variations listed below for a more refreshing summer dessert. But the chocolate and strawberry combination is fantastic and the chocolate chips give it a nice texture. 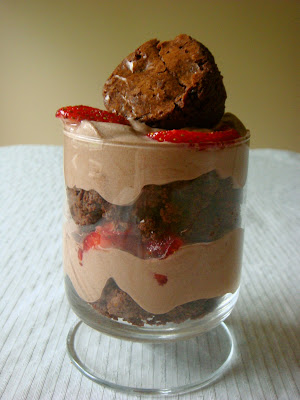 I do this in many variations but the same basic idea. I do one with angel food cake, and lemon pudding and raspberries and blackberries. And one with and orange pound cake, cheesecake pudding and strawberries.
Email Post
Labels: Cake Chocolate