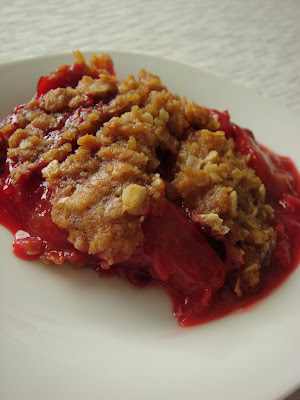 I just want to thank everyone who commented and helped me out with ideas. There were a lot of great suggestions. I decided on a Plum and Raspberry Crisp so that I could use up quite a few plums at once. My mom used to make a really good apple crisp when I was younger but not that often because we ate apples up pretty quickly. But when she did we would eat very small portions so it could last a few days. It never worked but we tried. So in a slight homage to my mother I figured I would try plums and raspberries. I think you need firmer fruit for a crisp but this came out ok. 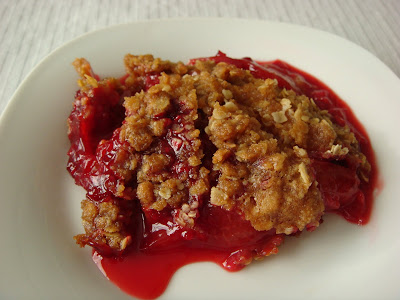 Preheat oven to 375. In a large bowl combine the plums, raspberries, cornstarch, lemon juice, and sugar. In another bowl stir together the flour, brown sugar, oats, salt and cinnamon. Add in the butter pieces and blend until it resembles coarse meal. Spread the plum mixture into a 13x9 glass baking dish and sprinkle the oat mixture evenly over the top. Bake for 40-45 minutes or until the top is golden brown.
Email Post
Labels: Fruit