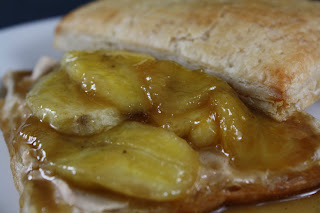 So this is what my Monday was like. Get to work a little early so that I can deal with all of the weekend stuff before my day actually starts. I get out of the car and then hear a hissing noise look down and my tire is quickly deflating until it is sitting on its rim. I go inside and get the guy that I work with to come and see if he thinks he can change it to the spare. And he says, "Yea, the back tire is flat too so I don’t think one spare is going to do you any good". Then my morning was full of calling a tow truck, waiting for said tow truck, calling the tire place where I was getting it towed and dealing with the aftermath of this whole fiasco. And if one more person asked me what did I do I was going to scream. If I knew what I did then wouldn’t I tell you during the process of me telling you my tires are flat.

So after the great day that I had I needed something to make my day better and the only thing I could think of was cheesecake. Because cheesecake is one of my absolute favorite desserts. The only problem with cheesecake is that it takes so long to make. OK, I know it only takes maybe 2 hours to prep and bake but then you have to let it cool for at least 4 hours and preferably overnight and I just couldn't wait that long. I was in dire need of a cheesecake fix pronto. So I tried to think of alternatives. Mini Cheesecakes, no they still had to chill for a while and to me the texture just isn't the same. Cheesecake ice cream, while it does taste a lot like cheesecake its not really the same thing. Finally it hit me, when P and I were out to dinner a few months back we had a great Banana's Foster Cheesecake. We had some really ripe bananas, and I had a block of cream cheese. I would recreate those flavors without baking the cheesecake part. So here it is cheesecake in less than 20 minutes! 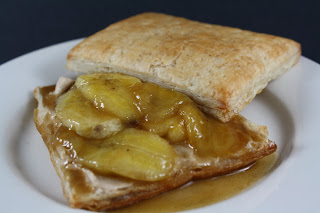 Bananas Foster Topping -
2 bananas, sliced into a medium thickness so they hold up to cooking
1/2 cup of brown sugar
4 tablespoons of butter
1/4 cup of dark rum

Preheat oven to 400 degrees and place the puff pasty square on a parchment lined baking sheet and bake until puffed and golden brown about 10 - 15 minutes. Remove from the oven and let cool.
While the puff pastry is baking mix together the cheesecake ingredients until smooth and set aside.
In a heavy bottomed skillet over medium heat combine the butter, brown sugar and rum and once everything has combined add in the banana slices and cook for 3 -5 minutes or until the sauce has started to thicken and the bananas are soft.

Assembly -
Take a piece of puff pastry and split it into a top and bottom. Take a generous amount of the cheesecake filling and spread it on the bottom of the puff pastry. Top with some of the bananas foster topping and place the puff pastry top on. 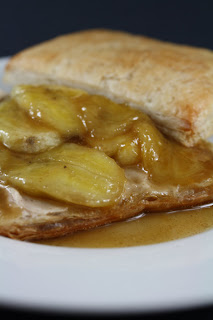