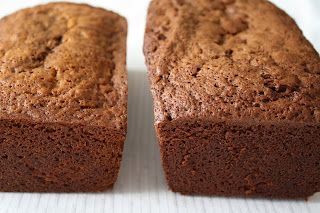 I love banana bread, it is honestly one of my favorite things to eat. And I love it with a big smear of Nutella on it. I know as if it could get any more unhealthy. So I figured why not combine the two but I didn't know how to achieve same creamy goodness as when it is spread on the bread. So I decided to do a trial. My recipe makes two loaves so I figured I would try different things in each. The first I would swirl some Nutella in and the second I would mix the Nutella in the batter. I figured that one of those had to work and lucky for me I would find out quickly since they bake at the same time. As you can see above they look almost identical before they are cut. But once they are cut into they are very different. The Nutella swirl sunk to the bottom, and the one with Nutella mixed in was a nice dark brown. And of course for scientific purposes I had to eat more than one slice of each.

Verdict - The Nutella swirl was more what I was going for flavor wise. But the Nutella mixed in one was so moist and wonderful but just didn't have all that nutella flavor I was looking for. But to be quite honest I put a lot of Nutella on my Banana bread. You could say that the Banana Bread is just a vehicle for Nutella for me. So the Nutella Swirl wins but I think I could still use more Nutella :) 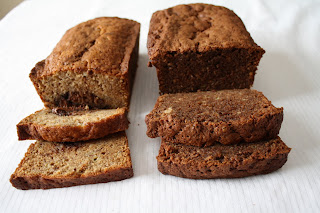 Preheat oven to 325 degrees. Butter and flour two 1 lb. loaf pans, or use Pam with Flour.
In a large bowl beat eggs until light and frothy. Mix in the oil and sugar. Stir in the bananas and vanilla. Combine the flour, cinnamon, baking soda, baking powder, and salt. Pour the flour mixture into the egg mixture and mix until combined. Divide the batter between the 2 pans.
Bake for 55-70 minutes or until a toothpick comes out clean when inserted.
Email Post
Labels: Bread Fruit