When Diets go out the window 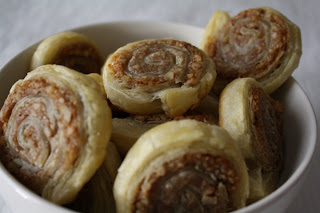 I have been crazy sick the last few days so that means no baking as I would have to eat it all so that I would not get anyone else sick. And that would mean my new diet would have to go out the window. But after 4 days I gave up on the diet and baked. I always keep some appetizers in the freezer and I needed to eat something warm and not so great for my diet. I swear when I'm sick the only things that sound good are fried, covered in icing or not meant to consume in the amounts that I consume them in. So I normally try to have some home made appetizer in my freezer at all times so that in case we are invited to a party or I need to bring something somewhere. So these were made for a contest a while back that I didn't win. But they were really good. I think they might need more blue cheese but I like a lot of blue cheese flavor so you can change it up as you see fit for your palette. They keep for a really long time and if you take them out of the freezer for 15 minutes they slice beautifully and bake up in minutes. Hopefully I feel better this weekend so I can bake the bread that I started a week ago, and bake in general. I feel like I'm going through withdrawals not baking this long so I think my kitchen will be on baking overload this weekend. 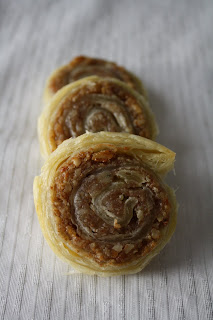 Thaw puff pastry according to package directions. While it is thawing in a food processor put the 2 cups of pecans in and pulse until they are roughly chopped. Then add in the blue cheese and break it into large chunks, process until the cheese is incorporated approximately 5 to 6 pulses. Add in the honey and process until it starts to pull away from the sides of the bowl a little. Place the paste into a bowl and set aside. Once the pastry thaws, place 1 sheet of puff pastry on the counter with a little bit of flour underneath it and roll it out about an inch longer on each side. Spread a thin layer of the pecan mixture over the whole surface of the puff pastry. Starting on the longer side roll up the puff pastry like a cinnamon roll making sure to roll it tight. Repeat with the other sheet of puff pastry. Once both are rolled place them in a freezer safe bag and freeze for 30 minutes. Preheat oven to 400 degrees. Remove the rolls from the bag and slice in ¼ inch slices. Slice as many as you would like as the leftovers will keep in the freezer for later use. Place on an ungreased cookie sheet about an inch apart and bake for 8 to 9 minutes, the center of the swirl will still be doughy and they will be puffed but not golden. Let cool slightly and serve.
Email Post